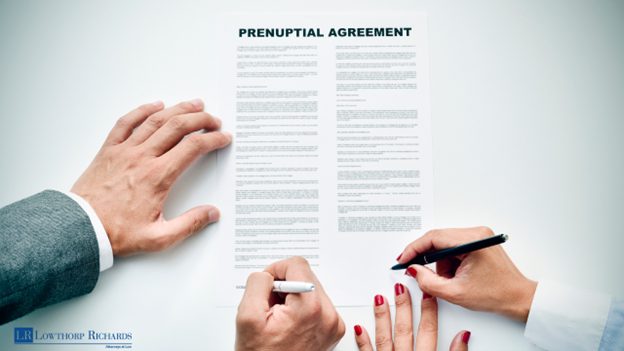 The Character of Premarital Agreements

Despite the negative impression left from B-movies premised around messy divorces, the general intent of premarital agreements (commonly known as prenup agreements) is to foster conditions that will help preserve an upcoming marriage. Part and parcel of that intent is to provide stability and predictability and protect a client’s estate from intentional and inadvertent loss. The client’s interests, broadly construed, includes those of its family members and dependents. You without doubt want to provide for your loved ones’ future needs and dreams. Additionally, when possible, you might want to minimize taxes, avoid probate, and deal with incapacity. A new marriage brings with it much joy and happiness, but by virtue of being new and including change, it can carry risk. This is particularly true for young spouses with developing financial resources and career tempestuousness. A prenuptial can offset that risk and help develop communication skills that will be critical for a long, healthy marriage. Let’s take a look at the characteristics of premarital agreements and what might cause one problem if or when it comes time for enforcement.

Premarital agreements must be freely entered, absent duress, undue influence or deception. Both parties must have the legal capacity to enter into the agreement. It must be in writing (exceptions apply) and signed by both parties. Absent issues in these areas, courts are readily accepting of premarital agreements, which can save significant court time and resources down the line, not to mention for parties. They can narrow the matters that would be of potential dispute later, particularly regarding ownership of property.

Under current law, if a partner wants to challenge the enforcement of a recent prenuptial agreement as unconscionable, that party must prove, among other factors, that s/he was not provided (or did not waive) a fair, reasonable and full disclosure of the other party’s property and financial obligations. To be on the safe side, parties should exercise full disclosure of material facts regarding the existence and valuation of assets in which the parties may have an interest or debts for which they may be liable. Parties should, upon request, provide access to records and books relevant to the assets and debts. Similarly, the client should disclose all material facts regarding income and expenses, particularly where community property or spousal support waivers or limitations are involved. The family law lawyers at our firm can help make determinations of the extent to which disclosure is required. The issue of unconscionability of a premarital agreement shall be decided by a court as a matter of law.

An agreement will be found not to be executed voluntarily unless the court finds that the party against whom enforcement is sought was represented by independent legal counsel or adequately waived counsel (Cal. Fam. Code § 1615).

One of the areas where premarital agreements provide the most value is their ability to prevent expensive and time-consuming litigation over whether property is community property or separate property. These agreements can specify that revenue and property accumulated by a person during marriage will remain that person’s separate property, free from claims of the partner. This is more often the case where the marriage and agreement at issue follow a prior marriage, particularly if it resulted in children or complicated property allocations. Since blended families are more and more common these days, premarital agreements and acceptance of them are not far behind. Parties can use them to predetermine issues such as who pays for career training and educational advancement, whether insurance beneficiary designations change, as well as other benefits. In certain situations, we would recommend recordation in the county where the property is located. We are happy to discuss these and other discretionary decisions with our clients as well as ways to avoid problems with prenups.

California has a no-fault marriage regime and premarital agreements cannot impose a penalty on a party for fault during the marriage. Premarital agreements will not cover pay for domestic services or companionship and cannot control the religious upbringing of children or alter mutual support core to the marital agreement. If there are areas not covered here, that are not strictly property distribution decisions, our expert lawyers are happy to discuss whether a premarital agreement will adhere or not.

One of the important things to look at regarding pre-existing premarital agreements is when they were entered. If they were entered into on or after January 1, 1986, they are subject to the Uniform Premarital Agreement Act (UPAA, Family Code section 1600 et seq.) This law was amended, effective January 1, 2002 (at least two of those amendments are not retroactive) and again in January of 2020.

For partners who are members of a domestic partnership registered with the State before January 1, 2005, an agreement between the partners indicating that they intend to be governed by the requirements of the UPAA, and that complies with those sections except for the agreement’s effective date, shall be enforceable as provided in the UPAA if the agreement was fully executed and in force as of June 30, 2005. (Cal. Fam. Code § 297.5)

For partners who are members of a domestic partnership registered with the State of California before January 1, 2005, an agreement between the partners indicating that they intend to be governed by the requirements of the UPAA, and that complies with those sections except for the agreement’s effective date, shall be enforceable as provided in the UPAA if the agreement was fully executed and in force as of June 30, 2005. (Cal. Fam. Code § 297.5)

Failing to plan is planning to fail

Please trust us when we say that we hope for the absolute best and are here to help you be prepared for everything else, just in case. We only want the best for future spouses and hope that premarital agreements only serve to gather dust. In case a marriage does not go as planned, we are happy to make sure that the rest of your goals and dreams are as impacted as little as possible.

If you have more questions about premarital agreements or estate planning in general, either for you or a member of your household, please contact one of our experienced specialists for legal assistance. Trusted estate planning attorneys are available to consult with you at Lowthorp, Richards, McMillan, Miller & Templeman by calling (805) 981-8555 or filling out our online contact form. We operate primarily in the Tri-Counties area  – Ventura, Santa Barbara, San Luis Obispo.